Over the last four decades media artist Martin Riches has designed and produced a
sizeable array of kinetic objects, sound sculptures, acoustic speech synthesizers,
music machines and interactive audio-visual installations.
Born in 1942, his first one man show was in 1973 and since 1987 he has worked
exclusively as an artist.
Having originally trained as an architect, Riches incorporates a strong engineering
aesthetic into his work, concealing nothing and he has made the transparency of his
machines one of their substantive virtues – the very opposite of a black box. His
music machines, speaking machines and other sound objects have inspired many
composers to write for them and so they are shown in not only in art and media
exhibitions but often in concerts of modern classical music and as collaborative
sound installations. 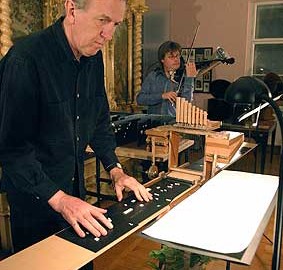