Mimicry of the human voice by European Starlings: the role of social interaction.

Although vocal mimicry by European Starlings (Sturnus vulgaris) has often been noted (e.g., Bent, U.S. Natl. Mus. Bull. No. 197, 1950), the development of it has never been formally studied. The present report describes social constraints on starling mimicry and suggests possible functions. Although the targets of the mimicry here were humans, the major aim of the study was to understand how starlings naturally select sounds for mimicry. In other words, is their mimicry a faithful imitation of their social or physical surrounding or is it. as in must other species, quite biased toward a particular class of sounds‘.“ Because humans can detect speech more acutely than avian sounds, speech mimicry was used as an analogue to natural starling mimicry. As the presence of speech could be easily perceived, it would thus be possible to identify the origins of any mimicked sounds, as well as conditions under which starlings mimic their social world.

Seven starlings, four females and three males, were captured as five-day-old nestlings (Table 1). They were hand reared in the laboratory by the investigators until approximately 30 days of age. During this period, they were maintained as a group with equivalent and extensive contact with human caretakers. At day 30. a male and a female were assigned to the interactive contact (1C) condition, a male and female to the limited contact (EC) condition, and the remaining three to the auditory contact (AC) condition. 1C1 and IC2 each remained in the homes of the respective investigator who had reared them. Each received daily vocal attention and companionship from its human caregiver. In addition, each had a male Brown-headed Cowbird (Molothrus ater) housed with it in a 0.7 X 1.3 X 1.3-m hardware-cloth cage. Explicit attempts to „teach“ 1C1 and IC2 speech were avoided, i.e., food or social contact was not offered as a reward for mimicry although each of these items was clearly sought by the birds. Whistled songs (e.g., „Dixie,“ „Popeye the Sailorman“) were performed daily, usually when the birds were allowed to fly free and interact with their human caregivers. Mimicry by 1C1 and IC2 was often imitated by the humans but again only in an unsystematic manner, i.e., the humans did not consciously imitate sounds as a particular strategy. Finally, 1C1 and IC2 were exposed to tape-recorded passages of human speech and whistled songs twice daily for one month.

The EC: starlings were also housed in homes, but with different caregivers who had not participated in the starlings‘ care as nestlings. Each bird was also housed with a cowbird companion. Because these birds were less „tame“ with their new human caregivers, they were rarely allowed to fly free or to contact humans directly. Each was housed, however, in a room allowing it extensive vocal stimulation from humans. That is, they heard speech in their environment but were not „spoken to“ consistently or allowed interaction with humans. ‚the EC birds were not tutored by tape recordings. The AC birds were housed as a group in a cage (4.8 x 4.8 x 3.2 m) on a screened porch belonging to one of the investigators where they could hear all of the interactions inside the home where IC2 was housed. As a result, the auditory environment of the AC: birds was yoked to the 1C condition. Thus, they were also exposed to the tape-recorded speech and songs twice daily for a month. Although these birds were originally as tame as the others, they quickly became quite shy with humans in that they both ceased to solicit food from humans and avoided being handled by humans. All seven birds were fed an identical diet based on the Bronx Zoo diet for omnivorous Birds and were given fresh water with vitamins and fresh food daily. Although IC and LC birds also received occasional „snacks“ (e.g., fruit or cheese) from their caregivers. the amount of food obtained in this manner was insufficient to lie of dietary consequence and was composed of food items already abundantly present in their normal mash. Thus, all the birds had identical exposure to humans until day 30 and then differed subsequently in terms of the social quality of their contact with human caregivers.

All the birds were tape-recorded regularly, producing about 1 h of vocalizations for each bird each week for 4 months. The birds were recorded at different times of the day across this period using a Uher 1200 Report recorder and a Uher 517 microphone. The tapes resulting from these sessions were then transcribed and the birds vocalizations were classified into five categories: clear human speech, human-produced sounds (e.g.  whistling and indistinct speech), non-conspecific avian vocalizations, mechanical noises, and starling vocalizations. Random passages of tapes from all the birds were coded by a second observer. Observer agreement was high (89%), with the most disagreement involving distinguishing clear speech and speech-like sounds. All transcriptions of clear speech were also analyzed for content to ascertain the human origin of the mimicry. 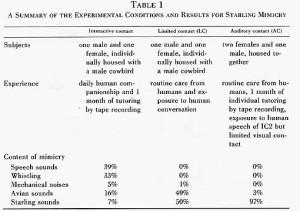 Both starlings in the 1G condition mimicked human sounds extensively. For 1CL 49% of his mimicry derived from human speech and another 25% from human whistling. Likewise, l(^2’s percentage at human mimicry was 68% . 28% comprising speech and 40% whistled tunes. For each bird, however, the proportion of mimicked speed) that was highly articulate was low, 9% for K’A and 4% for IC2. This figure derives from use of very strict coding criteria and the high degree at articulation and intelligibility required on the starlings‘ part to be clearly understood on audiotape. Using the broader criterion of speech-like sounds seems a fairer procedure in that human speech when spoken by humans into tape recorders may not be clearly intelligible but is unmistakably identifiable as human speech. This was the case for the starlings as well.

None of the LC or AC birds ever mimicked human speech although they all mimicked mechanical noises and oilier birds, most notably the cowbird companions of the LC birds (Table 1). Here their mimicry was frequent and quite accurate, reproducing even some of (lie higher frequency components of cowbird song (around 9 kHz). This frequency range exceeds that published for the starling voice: previous studies had recorded a maximum of only 8.2 kHz (Brand. Auk 55:26,3-268, 1938). Finally, no bird ever mimicked the tape-recorded passages although 1C1 did mimic the mechanical noise of tape hiss.

Origin of the mimicry

For both 1C1 and IC2 the major part of their human mimicry could be attributed to sounds produced by their human caregivers. Tills was evident not only by content hut by their distinct mimicry of the male caregivers‘ intonation patterns. It was. in fact, clear to other listeners whom the birds were mimicking. In both cases, the birds rarely mimicked the female spouses of their investigators although the spouses had frequently interacted with the birds after capture. In terms of content, the selectivity of their mimicry was also evident. ICf mimicked speech patterns such as „Good morning. Rex [IC1’s name]“ any statements such as „It’s time,“ „Basic research“ and „Hi.“ The latter vocalization lie subsequently used in interactions with humans and with other birds. I(J2 frequently said her name as well as often repeated statements such as „You’re a crazy bird.“ Both birds were prolific, if oh-key, whistlers and produced mimicked whistled songs of several seconds duration that were clearly recognizable. Most often, whistled tunes, easily recognized as distinct to humans, were combined by the starlings, e.g., IC1 would whistle a few notes of „Dixie“ followed by several notes of „Swanee River.“ The whistled tunes alsoappeared to go through many idiosyncratic variations that were solely created and re-created by the starlings. Another interesting feature of their mimicry was their combination of sounds that naturally occurred together, such as an episode consistently mimicked by IC1 comprising the sounds of a door opening and dogs barking, followed by saving „Good morning. Rex, and the production of a whistled tune used by his caregiver as a greeting. This was in fact the daily scenario as the caregivers‘ dogs were let outside, followed by IC1 being released from his cage and given his customary greeting.

Analysis of the recording sessions also revealed the repetitious quality of the mimicry. especially of the companion cowbird’s song or of whistled tunes that would be repeated „verbatim“ hundreds of times in rapid succession. For example. LC1 once mimicked the cowbird s song 256 times in succession during one 30-min session.

Sonagrams of mimicry by IC1 appear in Fig. 1. Because the aim of the study was not to determine how accurately starlings could mimic speech, but to learn under what conditions they could produce recognizable speech, no extensive efforts were made to obtain high quality tape recordings for acoustic analysis. Thus, the sonagrams may underestimate the starlings‘ mimicking accuracy. We judged the quality of mimicry by listening to audio tapes rather than by visual inspection of sonargrams. The actual content of the mimetic sequences was easily determined with this method in the same way that human speech is perceptible and articulate to listeners when heard over the telephone even though much acoustic detail is missing. I hat such detail is also lacking in starling „speech is demonstrated by the sonagrams. The question of the absolute accuracy of the starling’s mimicry awaits further analysis. 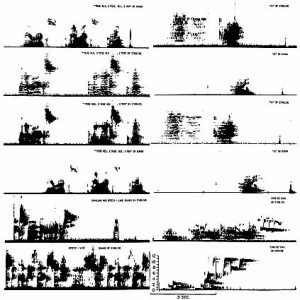 Fig.1. Transcriptions of the mimicry by 1C1: „Mere, Rex. c’mere, Rex, c’mon“ by human and starling, respectively, with a narrow band setting; same content with a wide band setting: starling and speech-like sounds by starling, speech-like sounds by starling: „Hi“ by starling
and human, respectively, with a s empirical evidence of the environmental origins of starling mimicry. Clearly what is important to the starling is the nature of the social relationship with its mimicked partner: only when humans served as actual interactants were they the target of mimicry. Likewise, when cowbirds or starlings filled this role, as in the LC and AC conditions, they constituted the starling’s mimicry. Perhaps a function for starling mimicry in large flocks is that their mimicry serves as „passwords.“ As such, the data are consistent with past work done on other starlings (Bertram, Anim. Behav. Monogr. 3:79 192, 1979) as well as in other social avian species (Payne, Anim. Behav. 29:688-697, 1981; Feekes, Z. Tierpsychol. 58:119-152, 1982).

A final note in order to distinguish this work from those in which birds, most recently the African Grey Parrot (Psittaciis erithacus), have also been „taught“ to talk (Todt 1975; Pepperberg, Z. Tierpsychol. 66:139-160, 1981). Although our method for transmitting human speech is consistent with the highly social quality of the tutoring methods used by Todt (1975) or Pepperberg (1981), and may in tact rest on similar social principles, our starlings were never consciously trained or taught any particular word or phrase. All speech was used as a method of social interaction modelled after how humans use speech with each other, particularly how adults use speech with children. Our aim was to see if social companionship with auditory exposure and no explicit training would be enough to produce mimicry. It was. What the outcome of explicit training procedures would be with starlings remains to he explored. We offer these data as an incentive for others to pursue the study of these talented and companionable birds.